A couple of days there have been cars trending on social media in Kenya as to have been locally made. A few are praising the attempts to turn Kenya into a manufacturing country that produces cars while a good number were pessimistic that the vehicles looks in terrible shapes.

On 22nd July, Made in Kenya (a kenyan government agency promoting locally made items) posted on their Facebook page " Kenya Export Promotion and Branding Agency is collaborating with Laikipia County to assess the needs of the Sagak Auto tech plant and build capacity to produce for the local, regional and international markets." and attached the following pictures.

Well, the government is now trying to give the companies goodwill to go ahead and produce the cars, unfortunately many netizens could not notice it that way ignoring the economic impact that we'll discuss later on in this post.

History of Cars in Kenya

Although it may look this is the first Kenyan attempt to produce cars, well, that's not the case, from 1980s, the government approved production of the Nyayo cars, a plan that flopped years later: 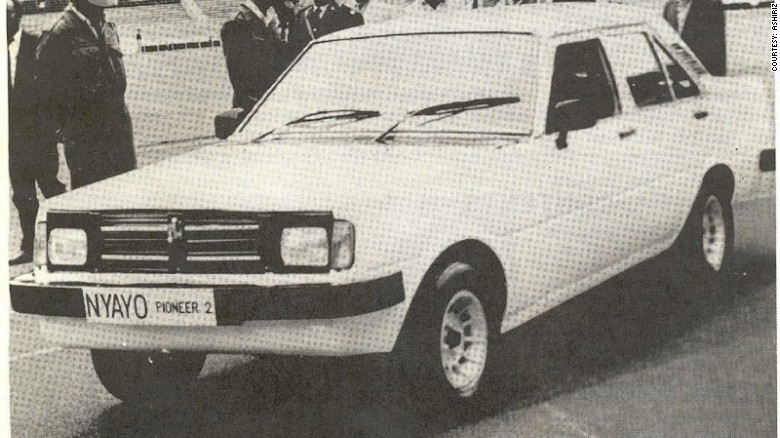 Since the attempts, there have been little done on the space to improve the speed and quality of African cars until a company the name Mobius  II was formed. The company was founded in 2009 by some British entrepreneurs called Joel Jackson.  It was a no surprise then that Kenyan car manufacturer, Mobius Motors,  was looking to introduce an affordable, no thrills, but robust and classy SUV for the African mass market. The Mobius II was set to be on the road by the following year. The company had started started accepting orders. This, their second model, was aiming to be a significant step up of the inaugural car released in 2014. Will it pave the way for a new homegrown car industry? The company though still in operations have not been able to live upto their dream.

Another attempt to grow the industry was the recent modification of the tuk tuks  locally; A local company has been able to redesign tuk tuks to accomodate upto six passangers with upto 1.5 luggage.

Backed by Made in Kenya, the posted "

The improved tuk-tuks have more carrying capacity fitting up to six passengers with a load capacity of 1.5 tonnes. Kenya National Youth Service has since backed the innovation and fronted the seed money, expertise, labour and premises to incubate the innovation.

A group of youths in the coastal Kenya have also successfully engineered a car that can move upto 80km/h. The vehicle still looks incomplete but is able to move and work just fine. Watch the video below to see it.

Impact on the economy

The first and foremost is obviously the impact on the economy: Taking a case of the Mobius  II,  the car is designed for the rough terrain of many of Africa's roads. Mobius Motors was founded in 2009 by British entrepreneur Joel Jackson. Jackson was working in rural Kenya where he found people had vehicles that weren't up to the task of negotiating the country's rough terrain and long distances. "Millions of people are having their productivity undermined because of the time it takes to move around and get from place to place, and that problem could be solved with a better type of product," Jackson tells Homekazi . Mobius Motors hasn't just got its sights on Kenya, but anywhere with poor quality roads. "Car companies are still focused on the BRIC (Brazil, Russia, India and China) economies. Africa is an overlooked market in general, and there is an opportunity to do something different," Jackson explains. The entry level model costs 1.3million Kenyan Shillings ($12,500). "The price is roughly the equivalent to a 5 to 6 year old sedan car in Kenya," Jackson claims. That being said, Kenya's GDP per capita at $1,455 means the car at this price, while cheaper than other imported options, is some way off for the average earner.

The second impact is the fact that only a few countries are producing cars in Africa. Kiira Motors, based in Uganda, is developing Africa's first hybrid car set to sell at $20,000 each. And Nigeria is also leading the charge. Its first car brand Innoson launched a range of private cars in 2014 made from mostly locally sourced parts. A report by PWC highlighted Nigeria's potential to become the automotive hub of Africa. This means that if Kenya can succeed in this cause, it could be one of the first countries to ever to this and without transportation could sell the cars cheaper to other African companies.

The government has tried to set pace so that manufacturers can start taking up and taking it to the next level. There are still a few countries doing the manufacturing of cars and vehicles therefore Kenya can scoop big if it can be one of the earliest birds. Economy-wise it can be beneficial.

Business and the Economy Category

B I am Calvins, a web/app/software developer and digital marker since 2016. I have a lot of interest in technology and business. I'm the lead developer on this website. My best programming languages are PHP, Javascript, Dart, SQL, C#, etc added with libraries and frameworks, I'm a full-stack developer.

There are no comments yet

Note: We sanitize our comments to keep them clean!